Hialeah is a city in Florida (FL), United States 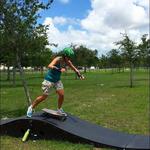 Hialeah ( /ˌhaɪəˈliːə/) is a city in Miami-Dade County, Florida, United States. With the population of 224,669 at the 2010 census, Hialeah is the sixth-largest city in Florida. It is a principal city of the Miami metropolitan area, which was home to an estimated 6,012,331 people at the 2015 census. It is located west-northwest of Miami, and is the only place in the county, other than Homestead, Florida, to have its own street grid numbered separately from the rest of the county (which is otherwise based on Miami Avenue at Flagler Street in downtown Miami, the county seat).