Sherbrooke is a city in Quebec, Canada 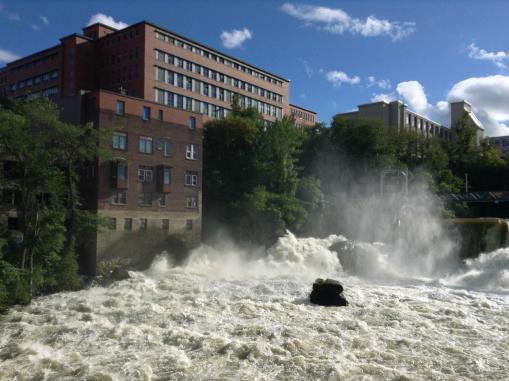 Sherbrooke (/ˈʃɜːrbrʊk/; Quebec French pronunciation [ʃɛʁbʁʊk]) is a city in southern Quebec, Canada. Sherbrooke is situated at the confluence of the Saint-François (St. Francis) and Magog rivers in the heart of the Estrie administrative region. Sherbrooke is also the name of a territory equivalent to a regional county municipality (TE) and census division (CD) of Quebec, coextensive with the city of Sherbrooke. With 161,323 residents at the 2016 census, Sherbrooke was the sixth largest city in the province of Quebec and the thirtieth largest in Canada. The Sherbrooke Census Metropolitan Area had 212,105 inhabitants, making it the fourth largest metropolitan area in Quebec and nineteenth largest in Canada.

Read about Sherbrooke in Wikipedia
Satellite map of Sherbrooke, Canada